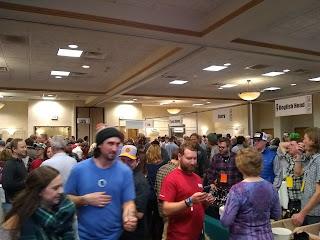 Tiramisu, French toast, crickets: These were the flavors one can't forget from the 2018 Big Beers, Belgians and Barleywines Festival.

The collection of roundly amazing beers — I poured just one into a dump bucket during the four-hour tasting — was again a master study on barrel aging, hearty hopping and using bugs to bring the right level of tartness to beer. But this year, more so than in past years, it also felt like a grand experiment on the adjuncts that can push beers beyond their normal limit. And what a wonderful palate-wrecking experience it became.

There were desert beers, including a New England-style IPA made with Betty Crocker cake sprinkles (Thank you, Outer Range Brewing, for keeping the cake flavor light). There were sours that relied on the presence of multiple fruits to create new flavors. And by the time you got the gumption up to try Epic Brewing's Chapulin Gose, you literally found yourself saying: "I like the beer, but I'm not picking up the flavor of the crickets or the agave worm salt in here." And, yes, you were bummed.

So what were the biggest takeaways of the festival? Here's a few:

1) The bolder the range of flavors in big beers, the more they stood out.
Certainly, there were the big and dangerous classic bourbon-barrel-aged imperial stouts there. Loveland Aleworks had a 2015 version that was incredibly smooth. River North Brewery offered up a whiskey-barrel-aged English-style old ale that was so warming it set your insides ablaze. 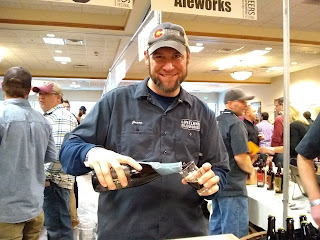 But the real head-turners were gems like Cellar West Artisan Ales' Farmers Breakfast, a farmhouse-style imperial breakfast stout that was re-fermented in bourbon barrels with maple syrup and offered a fascinating melange of flavors that somehow became French toast in a glass. Or there was Epic's Triple Barrel Big Bad Baptist, which not only featured imperial stout aged in whiskey barrels but had barrel-aged coconut that made this spring to a new vibrancy and overshadow its high ABV.

2) Spices are on the rise as adjuncts, thankfully.
You saw this trend where the beer advertised it blatantly. Crazy Mountain's Rum Barrel Aged Spanish Coffee Stout, for example, was rendered unforgettable by the fact that the Denver brewery used Mexican chocolate to make what could have been a heavy beer burst with flavor.

But the trend appeared even where you were least expecting it, and it was pleasing. Verboten's Tiramisu Little Nonsense had a surprising shock of Saigon cinnamon that left you with hope that chefs can make deserts like this too. And Intrepid Sojourner Beer Project's Barrel-Aged Imperial Turkish Coffee Stout added even more Middle Eastern spicing than its regular-strength version - and took your palate to a far-off place. 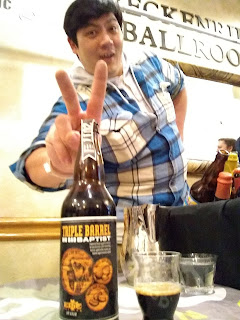 3) It's time to elevate Paradox Beer Company to its place among Colorado's best.
If there was a single beer of the festival, it was this Teller County brewery's Divide Ethos, a spontaneously fermented wild ale that felt like a kicked-up saison, with the bugs pinching your tongue with just a bit of sour and a whole lot of wild. The fact that it was the brewery's first coolship beer speaks even more to its ability to create new flavors.

Paradox was a big winner last year as well. It doesn't get as much attention as some of Colorado's other great wild-yeast-ale makers, partly because of its out-of-the-way location west of Colorado Springs. But it sure should.

4) It's the fruit and unusual add-ins, as much as the bugs, that are propelling stand-out sours.
Maybe Modern Times pushed the sour envelope a little too much with its One Million Tomorrows, but by mixing a ton of blueberries and raspberries into its wine-barrel-aged saison, it created such a complex flavor that you were willing to forgive the brewery.

No forgiveness at all was needed for Three Barrel's Hermano X, a lambic made with coriander, orange peel and three types of pepper that was tart enough to wake up your taste buds and your mind. And if Caution Brewing's Mazu Sour Belgian Golden — made with orange peel, coriander and cardamom and aged in red-wine barrels — wasn't the best sour on the floor, it may have been the most unique. 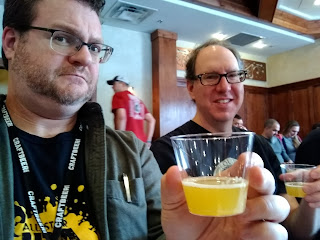 5) More significantly aged beers are needed.
Two-and-three-year-old beers were everywhere. But the joy of sipping Stone Brewing's 2007 Old Guardian Barleywine and enjoying its sweetly aged body even as the hops diminished was a short-lived pleasure because it stood so alone among the largely newer beers on the floor (save for Sam Adams' 24-year-old Triple Bock).

There wasn't much one could have left wanting from the festival. But 10-year-or-older beers would have been fun to try more frequently.

Comments:
Test Troxin You need to nonetheless work your triceps and biceps independently and. Specifically perform the bicep barbell curl and the triceps pulley press out. If you follow these workout tips will certainly grow.Body building is very vital that build muscle mass and increase strength and stamina. http://t-rexmuscleadvice.com/test-troxin/