Just catching up on a few tidbits from today that will make you want to raise a pint glass:

1) Black Fox Is Back 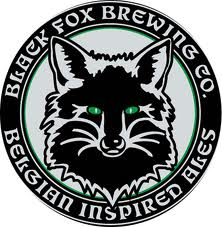 Black Fox Brewing was Colorado's first all-saison brewery, adroitly churning out farmhouse-style ales with ingredients like ground gingerroot, black peppercorns and red chilies, even before saisons were cool. Then John Davidson left Bristol Brewing, in which Black Fox was housed while he also made beer for the Colorado Springs brewery, went to work for Dry Dock and put his side project on hiatus.

Black Fox announced via Facebook Thursday that is has made its comeback beer, "Cracked," and expects to have it on tap in 10-14 days at Dry Dock. A lot of breweries have specialized in and made some great saisons over the past four years, but Black Fox's John Schneider turned out head-turning creations, including a chocolate chili saison one that was the talk of Vail Big Beers 2011. It will be good to have the brewery back.

2) Patty's Chile in Your Living Room

Patty's Chile Beer, the longtime Wynkoop Brewing gem, is neither the best chile beer in Colorado (that's Billy's Chilies from Twisted Pine) nor the best beer from Wynkoop (that's Belgorado). But it is the most intriguing beer to quaff before a summer Rockies game, that subtle but fiery touch of Anaheim chiles and smoked Ancho peppers perfectly complementing the German-style ale to be both light and complex.


On Thursday, Wynkoop announced it is now canning and distributing Patty's Chile Beer, making it one of the most interesting of the brewery's products available for take-home enjoyment. And unlike the Rocky Mountain Oyster Stout, which is sold only in two packs, you can get four of these at a time.

I'm a bit behind on finally poring over the 7th edition of the Beer Drinker's Guide to Colorado, which was released on July 31, but I have to say it's pretty extraordinary. The map now includes 224 operating and soon-to-open breweries, including some in towns that even us beer geeks didn't realize offered a brewery.

What Mike Laur has done so well in crafting this map - aside from including $300 in free beer coupons in a product that retails for $14.95 - is capturing the constant growth of the beer scene throughout the state. It lists breweries, beer bars, homebrew shops, recommended glassware, even national monuments. And it is well worth the investment to pin this puppy up to your wall and thumbtack your conquests, so you can stay ahead of the game - at least until the 8th edition comes out with 300 breweries on it. 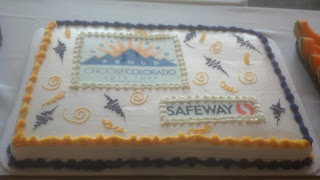 Two weeks ago, the Colorado Department of Agriculture launched the "Choose Colorado" state tour, promoting local agriculture and products. There was talk of local cantaloupes and corn. But make no mistake, this tour is laden with beer as well.

The 14-year-old "Colorado Proud" program is set up to promote all food and beverage products grown and made in Colorado, and it is heading out on statewide tour for the first time this year. And state officials have not been shy about pointing out the advantage of locally grown hops, barley and additives that make locally brewed beverages especially special.

Take, for example, Breckenridge Brewery's Agave Wheat, a beer made with a key cactus ingredient that Breck brewers picked up at Sprouts grocery stores throughout the Denver area. They created the beer, labeled it proudly as a Colorado ale and watched sales of the tangy wheat with a stronger punch than most of its ilk grow across the country. 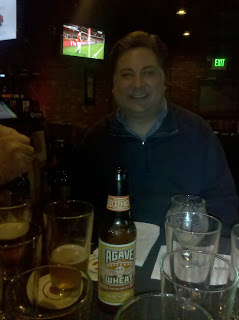 And, said marketing director Todd Thibault (pictured to left), he and brewer Todd Usry used the Colorado label to promote it, especially when growing into a new market in South Carolina some seven years ago.

"We'd walk in bars and say 'We're Todd and Todd from Breckenridge Brewery in Colorado. And people would say, "Hey, Colorado?'" he said.

Doug Hyndman, head brewer at Dry Dock Brewing, went to Clemson University in that very same state of South Carolina, and he (pictured below) followed the Colorado reputation across the country. Dry Dock just recently joined Colorado Proud to support Colorado's efforts to promote its homegrown products, he said. (And we all know how well that brewery promotes Colorado beer.) 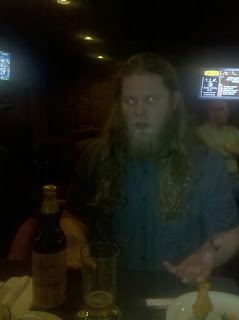 So, what does this program really mean for the average beer geek, who already tends to search out Colorado brews and promote the state's brewing scene? Probably not a whole lot to the learned.

But what can it do for businesses that are considering whether to invest more in Colorado products, including Colorado beers, as well as their customers? Well, just ask Rob Lanphier, owner of the Handlebar bar/restaurant and Pour Kids Bar Group.

Pour Kids is a "statetriotic" effort that promotes not just Colorado beer, wine and liquor but Colorado-raised produce and Colorado-made products. People may not think about ordering Colorado-specific when they come in, but when presented with a menu full of state-centric options, they tend to gravitate toward them and support local products, Lanphier said.

"There's really a heightened interest in buying local. I've noticed this trend the last couple of years," he said.

And that's a goal that all Colorado beer drinkers can support.


Great Divide: Coming to a Festival Near You 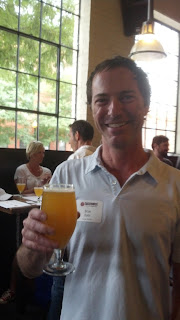 See that beer that Great Divide owner Brian Dunn is holding above? It's complex. It's excellent. And you'll likely never find it in the Denver brewery's taproom.

Dunn et al have brewed what they are calling Cultivate Farmhouse Ale. And, appropriately, it will be served at one place - Chipotle's Cultivate Festival, taking place at Denver City Park on Saturday, Aug. 17.

The beer uses Colette, Great Divide's easy-drinking farmhouse-style ale, as its base. But it adds to it black peppercorn and curacao orange peel. And that, it turns out, makes a lot of difference. 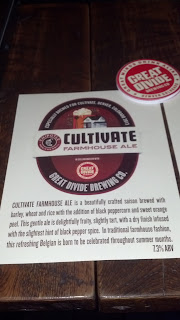 Cultivate Farmhouse Ale simply has a bigger presence to it than Colette. You won't taste pepper in the beer.  But you will be able to feel something that has a shade of subtle spice on it, lighting up the back of your throat as it goes down. And it's doubtful you'll pick out the specific taste of orange peel. But there will be a subtle tartness - not enough to make you pucker, but just enough to let you know there is something else in there.

Now, I'm not one to pimp a corporate festival. (And, yes, Chipotle, while you may serve very natural foods, you still are the 16th-largest quick-service restaurant chain in America, which makes you corporate.) But there will be a bunch of other local food producers there. And several will be incorporating Great Divide beer into their products. 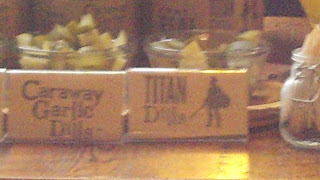 There will be, for example, The Real Dill, a craft pickle maker (yeah, I used that term) whose products include a subtly hop-accented Titan IPA pickle. And there will be Lix Stix, an artisan ice pop maker whose creations include an orange-cream Colette bar and a Yeti fudge pop with sea salt that is enthralling in the way it lets you know it edges beyond just chocolate.

The festival also features local music and Chipotle foods like creations from their ShopHouse Asian Kitchen chain that doesn't have a location yet in Colorado. But if you go, meander up to the Great Divide tent and insist they serve the Cultivate Ale year-round. A guess: You'll like it even better than you like Colette.