5 Things I Learned from Collaboration Fest 2016 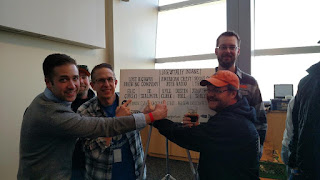 Saturday's Collaboration Fest once again showed why it's quickly become one of the top beer festivals in Colorado, as brewers toppled over each other in an effort to show off their creativity, especially with new ingredients and new styles of ale. On a day when more than 85 beers were available, some would be considered slight misses, but it was hard to find anything that was a complete fail.

That said, a few certainly did stand out. And they are worth mentioning - and begging brewers to bring back throughout this year.

1) A perfect IPA still stands alone.
Cannonball Creek and Pizza Port stole the day with the simple idea of a wheat IPA. While No Man's IPA may not have jumped off the page when looking at descriptions of the offerings, it immediately announced itself with a full mouth of smooth, flowery hops in a dangerously easy, fully integrated body. Simple, yet so well done that no one else's barrel or added fruit could steal its limelight.

2) That said, barrels and added fruit spoke very well for themselves.
If No Man's IPA wasn't the first beer mentioned in conversation during the festival, than the TRVE/Prairie Oak-Aged Gose on Oklahoma and Colorado Peaches was. A very balanced sour that mixed an occasional burst of acidity with a peach presence that was heavy without being syrupy, this was a brilliant idea.

Equally impressive was the Deux Funk, a barrel-aged sour ale from Funkwerks and North Carolina's hot Wicked Weed Brewing. Flavors of grape and a hint of kiwi/passion fruit burst out in a clean, smooth effort that was less challenging than pleasing.

3) Some bold flavors worked, some didn't.
New Belgium and Ratio Beerworks had one of the boldest ideas of the festival — a bruleed grapefruit saison that I had the chance to shoot a video about. Everything about it worked, from a minimal sweetness that evened out the grapefruit bite to its finishing with a verve of carbonation. This is how well-planned experiments should go.

That result ran opposite to the outcome of Peanut Butter Lunchbox, the Elvis tribute made by Denver Beer and DC Brau with heaps of peanut butter and a hefeweizen yeast to add a banana flavor - but maybe not quite enough of either taste. Still, the presence of what is hopefully just Denver Beer's first pass at this idea was reason enough to cheer the creativity on display at the festival.

4) Weldwerks came through.
Few breweries at the festival had as many curious eyes on them as Weldwerks, fresh off its being named by USA Today as the best new brewery of 2015. It didn't disappoint, working with underrated Snowbank Brewing to offer a Barrel-Aged Mocha Stout that was as thick as its name implies but still tamped with enough chocolaty sweetness to make this very, very drinkable.

5) Don't sleep on the amateur brewers.
Even among the piles of collaborating beer makers, one of the standout offerings came from the collaboration of New Belgium with beer purveyors Falling Rock Tap House and Star Bar. Rock Star, made with New Belgium's sour "Felix" base, was nearly pucker-worthy but calmed enough to offer up a sour-apple feel that brought you back for more.

And, as I wrote before the festival, I was privileged enough with a group of my fellow beer writers (pictured above) to team with Lost Highway Brewing to put forth the Fourth Estate Chocolate Stout, made with English yeast and Ghirardelli chocolate. The beer turned out wonderfully sweet and easy and had jaw-dropping lines at times - a situation for which all credit goes to the folks at Lost Highway.


How to Make a Collaboration Beer 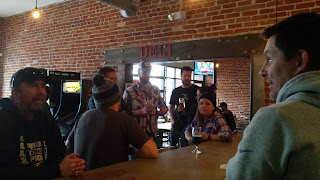 Collaboration Fest, scheduled for Saturday afternoon, has become one of the can't-miss festivals in Colorado. This year, 140 breweries from 21 states and five foreign countries are scheduled to roll out 85 new beers — many of which push the envelope on flavor profiles and creativity.

But for those of us who cover the beer industry, even looking on at this spectacle and tasting as much as we can put down was not enough. So, under the leadership of Brewtally Insane authors Mark and Patti Robinson, a small team of beer writers teamed up with Sir James at Lost Highway Brewing and found out what it was like to make our own collaboration entry.

First of all, the terms "our" and "collaboration" are being used loosely here. Mark and Patti deserve almost all of the credit for coming up with the idea. And 100 percent of the actual making of the beer was done by Lost Highway, lest you fear what kind of scourge might be in that glass when you walk up to the brewery's booth tomorrow.

But Patti came up with the idea of mixing in a classic Belgian ingredient and creating a chocolate stout, something the Denver Belgian-style brewer that also operates the Cheeky Monk had not done before. And after the beer writers decided on using Ghirardelli Chocolate, head brewer T.J. Compton decided to use an English-ale yeast in the beer, feeling a Belgian-ale yeast could clash too much with the chocolate.

For brewing day, we largely stood around watching T.J. and Sir James work. I felt lazy right up until I attended a later collaboration brew between New Belgium and Ratio Beerworks and realized that most of the brewers there too stood around sampling and chatting while a few people added ingredients and ran the equipment. It just goes to show that a lot of the great beers are made into what they are in the idea stage.

The beer writers' collaboration may not set the festival on fire. But it offered a chance to hang out with a great group of people and discuss beer in general. And I guess that really is the point of tomorrow's event.