6 Moments that Could Only Have Happened at Big Beers 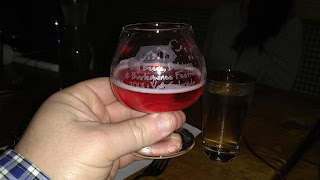 Most festivals are defined by the beers poured at them, and this year's Big Beers Belgians & Barleywines Festival could talk about nothing but its offerings and still rank with any festival in America. But after several weeks of reflection following this year's event, it's become clear that it's not just the outstanding pours that defined what may be Colorado's best beer event.

Instead, it was those moments that you keep coming back to that simply don't happen at other gatherings of brewers and beer connoisseurs. And it is worth noting them to explain why the 2019 version of the festival - the third since its move from Vail to Breckenridge - both jumped over the high bar it set for itself and sent the message that it is absolutely as required a place to be as the Great American Beer Festival that takes over Denver each fall.

1) Great Divide's Marriage Beer
The best festivals inspire brewers to make a new beer for them, or to break out of their cellar something they had saved for a special crowd. But when I asked Great Divide owner Brian Dunn - yes, he pours the beer at Big Beers - where his Maple Pecan Yeti that he was serving had been hiding, his answer floored me. It was something the brewery made for an employee's wedding reception, and he thought this would be a good chance to serve the rest of it.

So, it's not just one-offs that are poured at Big Beers, but one-offs made for a very limited crowd that the brewers then think are worth serving again at a festival because of the intimacy and knowledge of that crowd. And the Maple Pecan Yeti, by the way, was one of the highlights of the day -  a celebration of blending a sweet flavor into a giant imperial stout that made the beer far more craveable and drinkable than one could have imagined it being.

2) Five minutes with James Howat
If there was a beer better than Maple Pecan Yeti, it was Black Project's Stargate Peach Rye: Nectarine Bourbon, a spontaneously fermented sour ale aged on peaches and nectarines in a fresh whiskey barrel. The beer is both pucker-worthy and succulent in its deep flavors, and one might be left wondering just how something so superior would be made. But at Big Beers, I wasn't left wondering. In fact, I stood there for five minutes talking with brewery founder James Howat about just how the beer came together, when it would be available at the brewery and how he feels about the growth of beer makers around him in the South Broadway. There was no rush to finish the conversation, and there was no feeling that he wanted to move onto the next beer drinker. When the brewers pour at Big Beers, they interact like they're having conversations with old friends. That may be the best part of the festival.

3) Augie Carton and Nile Zacherle
If you're not from New Jersey, you probably don't know much about Carton Brewing; likewise with your familiarity with Zacherle's Mad Fritz Brewing if you don't live in the Napa Valley. But at Big Beers, two maniacal geniuses who don't sell beer outside their home states are at your beckon call to discuss the leading edge of experimentation in the country. 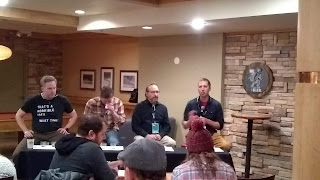 Carton (far left, above) took time in panel discussions to explain how he makes a beer, Decoy, that approximates the flavor of five-spice roast duck (a fascinating and delicious adventure) and then poured at the general tasting his Gilded Lily Tripel that was made with fresh white truffles. Zacherle (seated next to him, sniffing a beer) wowed the morning kick-off seminar with two pale lagers made with water from different springs that had unique tastes, and he popped out a geranium-thyme kolsch that made you want to forage for your own ingredients to add to traditional beers.

4) The "Lines"
At one point early in the commercial tasting, a friend directed me to Casey Brewing and Blending for its Jammy Sour Ale, a blackberry-added, oak-barrel-aged collaboration with Side Project that had a full and bright body. It was the biggest line I waited in all day - a full 10 people long.

Later, I stood in a nearly similarly sized line for the brilliant grape-infused beer at Liberati Osteria & Oenobeers when I decided that I was thirsty enough to step out and go directly to the front of the non-existent queue for Side Project's tart and intriguing Punchdown Pinot Noir Wild Ale. And so it went at a festival where your choices ran the gamut from brilliant brewers to very good ones, all of whom had something to offer that was great. 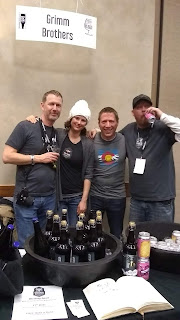 A friend whom I attended the show with informed me that Bell's Barrel-Aged Third Coast Old Ale Barleywine was as perfect a beer as he'd tasted; a sentiment I largely agreed with after I tried it. And it was a co-owner of Grimm Brothers Brewhouse who insisted I try his Feisty Fearless, a Fearless Youth dunkel aged in Feisty Spirits barrels that transformed into a batch of orange-peel-sotted, slightly acidic goodness.

But throughout the day, I would set my beer down at a table to take notes, and whoever happened to be there segued naturally into conversation about what I was drinking, what they were drinking and what some of the hidden gems of the festival were. That's just the feeling in the Big Beers crowd. And through these pieces of advice, I found some of the other best beers of the festival, such as Dry Dock Coconut Belgian Dark, /Founders KBS 2018 and Kane Driftwood, an imperial brown brewed with molasses and maple syrup and aged in brandy barrels. 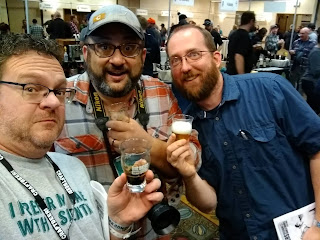 One of the underrated events of the three-day festival - two days of dinners and gatherings preceding the commercial tasting - is the beer and cigar pairing that is held on Friday night at Beaver Run Resort. You don't have to be a smoker to enjoy it, because those who want to pair their tobacco and alcohol are doing so outside on a patio, while everyone else is inside sampling a jaw-dropping supply of beers dropped off for the event by many of the breweries that are in town, and it turns into sampling and conversation that is like a pre-game event to the big tasting.

This year, the conversation was both serious and mournful at times among the attendees, as Big Beers co-founder Bill Lodge had lost his daughter, Megan, in a car accident just weeks before. And the word spread quickly through the crowd that what we all wanted to do was to help in this terrible moment in the only way we knew how - by contributing to a fundraiser for Eagle Valley High School's speech and debate team, which was a passion of Megan's, in honor of both her and Bill and Laura Lodge.

That's what a beer festival can be at its best - not just a random gathering of drinkers but a community of people who are there for the sharing, for the experimentation and for the human emotions that go beyond enjoying a great beer. And that's why Big Beers, Belgians and Barleywines proved again that it's an experience much more than it is just the sum of its amazing tasting offerings.