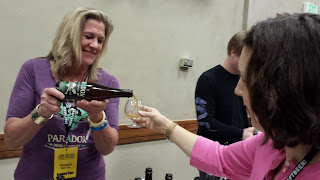 Colorado's best themed beer festival found a new home in Breckenridge after 16 years in Vail and, frankly, found a new energy. There was vibrancy throughout beer bars in the town and vibrancy throughout the Beaver Run Resort, where most events were held. And brewers clearly tried to raise their games with the beer they were pouring — and, in many cases, succeeded.

1) The new wave of imperial stouts will redefine the style. 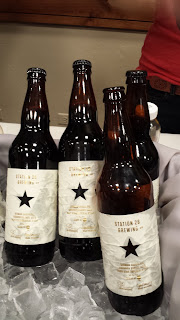 It may sound obvious, but you can't drink Russian imperial stouts for three-plus hours without them beginning to taste a lot alike. That is why the growing number of brewers adding unique ingredients to these creations — ingredients that go beyond the coffee and chocolate that brewers like Epic already have pioneered so well — were the ones most often turning heads at Big Beers.

Station 26 Brewing stood at the head of the pack with its German Chocolate Bourbon Barrel Aged Dark Star Imperial Stout, which felt every bit like the desert it was named after and flowed so easily at 13 percent ABV that you didn't know whether to be enthralled or frightened. And very close to that creation in its palate-pleasing level was Weldwerks Brewing's Barrel Aged Mexican Achromatic, which bubbled over with cinnamon and vanilla and made Mexican coffee weep at what it could be with hops and barley added.

2) The barrel can make all the difference.
With more breweries trying more ways to age their beer in barrels, the possibilities are almost limitless at the flavor profiles that can come from the experiments. But not every decision to throw a beer into a barrel is a solid one — a truth that could be seen in the number of barrel-aged saisons from very good brewers that felt listless and undefined. (A major exception was the Old Order 6 bourbon-barrel-aged imperial black saison from Solemn Oath Brewing, whose malt backbone allowed the beer to stand up against the barrel).

But there were brilliant decisions with barrels too. Paradox Beer's Trois Ans Anniversary Ale, aged in Spanish Cedar barrels, gave off a wonderful blend of tart and smoky-wood complexity and made you stop to think about what you were tasting. Similarly, the choice by Grimm Brothers Brewhouse to age its Magic Mirror imperial koltbusser in oak barrels turned an adequate malt monster into a tart and challenging beer that showed off its honey and molasses in new and vibrant ways.

3) More chai beers and imperial IPAs are needed.
Two years ago, tiny Altitude Chophouse had maybe the beer of the festival with a chai-infused dunkelweizen, making one ask why more breweries don't use this palate-enlivening ingredient. This year, New Holland Brewing absolutely startled with its Dragon's Milk Reserve Vanilla Chai, which was a full-throttled expression of how bold flavors can make big beers seem like pleasant tea.

But while chai beers remain maybe unsurprisingly rare, it was a little shocking to see the lack of barrel-aged IPA and double IPA beers on display when the style combines the two most popular craft-brewing trends of the past 10 years. And one sip of Steamworks Brewing's 50/50 Barrel Aged Imperial IPA, with its huge whiskey mouthfeel almost perfectly balanced by its big hops, showed why this is a trend that needs to pick up. 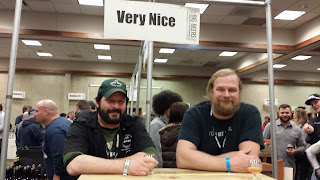 4) One never needs to leave the resort to really enjoy Big Beers now.
A primary advantage in moving to Breckenridge was to plop the festival in the midst of a town that could support it with days of special tappings and beer/food pairings around the main event. And while reports where that the gatherings at places like Aprés Handcrafted Libations were phenomenal, you didn't have to step foot into the negative-11-degree weather to truly enjoy the event.

Late-night activities at Beaver Run featured welcoming collections of brewers and beer lovers alike, particularly the Friday night beer-cigar pairing that let drinkers try to combine smoking and drinking if they wanted - or just wander around and sample some of the best beer in the nation, often while talking to the man or woman who made it (without any pouring lines).

The seminars have ramped up throughout the morning and early-afternoon of the main tasting, providing attendees with more knowledge than you could ever want about the brewing process (more to come on that in a later blog about experimental malts). And the resort bar became a place to go by yourself, knowing you'd run into industry friends.

Laura and Bill Lodge exceeded expectations this year. And the festival keeps getting better.