Spangalang: One Year In, Exceeding All Expectations 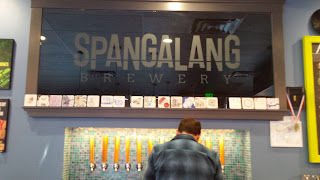 I've been having a debate in my mind lately that probably isn't worth having: What was the best Colorado brewery to open in 2015? Early on, I kept coming back to Ratio Beerworks, which I've gushed about both as opening with a bang then producing more unique and complex beers as it progressed over its first year.

But it's unrealistic to crown a single champion in any year that also saw the arrival onto the scene of Spangalang Brewery, the gutsy venture from three former Great Divide guys that opened in an old Department of Motor Vehicles office in Denver's Five Points neighborhood. Every experimental beer release seems to add a new twist to its repertoire, and a recent visit to the brewery showed just how much it has going for it.

Any brewery creates a certain lore when it wins a Great American Beer Festival gold medal less than four months after opening, as Spangalang did for its Belgian table beer, Sugarfoot. But while this lower-alcohol offering is light and solidly estery, it is not one of the multiple beers on the menu that actually will make you exclaim "Wow."

Pretty much anything in the Nightwalker series of imperial stouts will make you do that, from the deceptively smooth original to barrel-aged editions like the 2016 version that take on the feel of its Breckenridge Distillery vessels without being overbearing. Both, however, seem like common offerings compared to the Nightwalker Con Alma, which was re-fermented with grape juice and takes on a wine-beer hybrid quality that is head-scratching in its ability to incorporate both the chocolaty dark flavor of the base beer and the fruity mustiness of its addition. 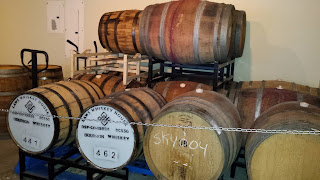 That's not the most impressive thing Spangalang dreamt up for its one-year birthday celebration, however. That honor goes to its simply named Anniversary Ale, a blend of several hoppy offerings, some of them barrel-aged and some not. Deep, oak-y, full of complexity and offering you a chance to taste both the woodiness of the aging and the non-acidic underlying flavor of Simcoe, Chinook and other hops, this may well be the best beer a Denver brewery has produced so far in 2016.

Still, Spangalang comes back a third time to jolt you with its Protocrat Gose, a traditional offering with its hint of salt that is kicked up in tartness to match the American palate. At a time when gose is becoming one of the hip styles on the market, this could set the standard, at least in Denver.

Truth be told, there was nothing on the 11-beer tasting menu last week that could be called even a slight miss. The D-Train IPA was a big and slightly sweet hop bomb, the Hop Colossus Double IPA was surprising in its woodiness (despite its lack of barrel aging) and the Beatrice Saison, while not a stand-out, had a classical quality to it.

So, should Ratio or Spangalang wear the title of best new Colorado brewery of 2015? Or should that go to WeldWerks, which USA Today proclaimed the best new brewery in the country? In truth, it doesn't matter. But what is apparent is this: Whereas even the best new breweries would take a year or two to get up to full speed half a decade ago, there are places bolting from ribbon-cutting to national-interest-demanding in less than 12 months now. And Spangalang is absolutely one of them. 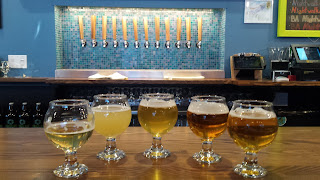